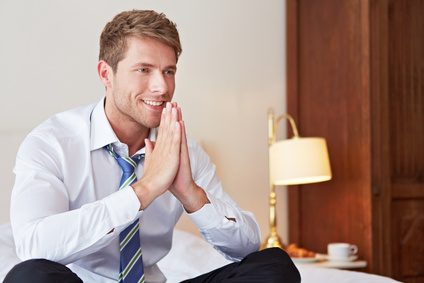 People commonly say that “money can’t by happiness,” but such people do not bother economists. Economists like to quantify everything in terms of money, including happiness. And when they got wind of research that religion increases long-term happiness, they naturally asked, “By how much (in US dollars)?” More exactly, Timothy Tyler Brown (University of California, Berkeley) investigated the value of happiness prayer yields for the average individual per year in dollars, and found that the answer is $63,628.

In other words, Brown aims to treat religious practice as a utility function that positively correlates with happiness. As he puts it, “Given that different religious activities are associated with life satisfaction, it should be possible to put a monetary value on any one of these activities.” But which activities? Brown realizes that many religious practices involve community, and that the happiness gained from them may not come from religion per se but from socializing. For example, happiness received from going to church services may come from the social and not the religious aspect of the church service. As such, Brown needs to find religious activities divorced from other sources of happiness. He reasons that private prayer suits the task well because it is clearly religious and has no other obvious variables that would yield happiness.

He next decides ahead of time on a criterion by which to determine if prayer is valuable or not. Simply knowing prayer’s monetary value in a vacuum means nothing—it must be compared to something. So, Brown chooses to compare prayer’s monetary value to the median household income in the United States ($44,684 in 2004 dollars). If prayer’s yearly monetary value exceeds $44,684, then it will be considered satisfactorily valuable.

Finally, Brown must find a method that converts happiness into currency. He argues that the Subjective Well-Being (SWB), or “life satisfaction,” method best fits this study. The SWB approach tries to get an answer to the following question: “Considering your overall life satisfaction or happiness when you have a particular thing of interest: how much money would we have to pay you to make you just as satisfied or happy if we took away the particular thing of interest?” Importantly, the SWB asks this only implicitly – the person taking the survey never faces this question directly, but the SWB guides the researcher in formulating less demanding yet relevant questions. Once Brown learns someone’s prayer frequency and household income, the rest boils down to mathematics.

Brown relies on the 1996, 1998, 2000, 2002, and 2004 General Social Survey (GSS) for his data. Unfortunately, the GSS did not capture all of the data to satisfy the SWB, and so Brown had to use a modified approach. He admits that because of this, his income to happiness ratio may be biased.

As with all surveys, Brown admits several limitations. First, the General Social Survey did not provide the ideal amount data for the topic at hand. Second, this study assumes that everyone acts as “rational utility maximizers.” Finally, Brown had to handle the “hedonic treadmill” effect. The hedonic treadmill effect means that increases in income lead to only temporary increases in happiness. As time goes on, people get accustomed to their new income level, and the increase in happiness they first experienced when they first received their higher income level tapers off over time.

In the end, some may raise an eyebrow at Brown for evaluating prayer in terms of money, but this may only reveal their own bias against economics. After all, every study in the field of the scientific study of religion has to treat religion in terms and categories native not to religion but to the given scientific field studying religion (for example, neuroscience). Economics certainly has the freedom to do the same. What these protestors may really want is an interdisciplinary approach that is able to go beyond simple reductions to scientific categories—and that may be priceless.

For more, see “A monetary valuation of individual religious behaviour: the case of prayer” in the journal Applied Economics.