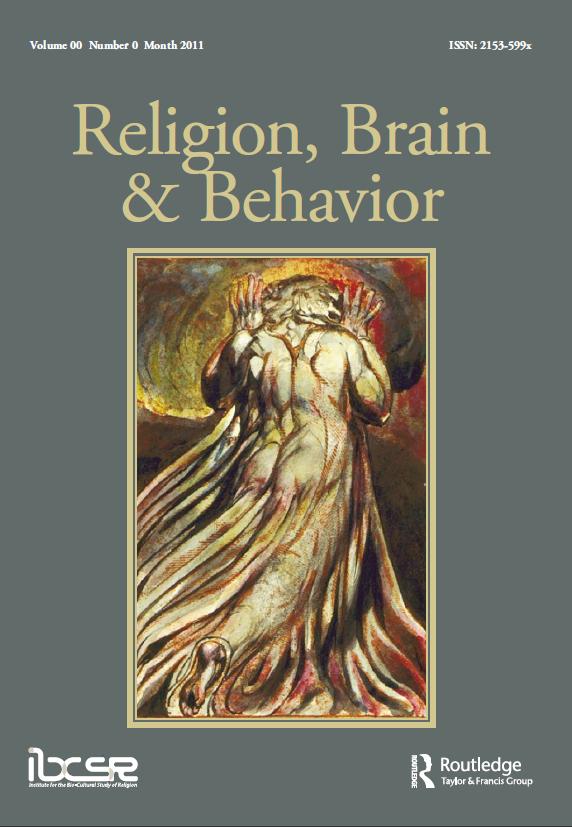 Religion, Brain & Behavior has a CiteSchore of 3.5, which ranks #2 among 594 Religious Studies journals in SCOPUS.

Recommend the Journal to Your Library

An RBB subscription is included at a discounted rate with membership in the Institute for the Biocultural Study of Religion. IBCSR membership has other benefits as well, including subscription to a monthly research review and networking opportunities with other researchers interested in the scientific study of religion. Institutional and individual subscriptions to the journal are also available directly from Taylor & Francis. See here for further information on how to become a member.

The aim of Religion, Brain & Behavior (RBB) is to provide a vehicle for the advancement of current biological approaches to understanding religion at every level, from brain to behavior. RBB unites multiple disciplinary perspectives that share these interests. The journal seeks empirical and theoretical studies that reflect rigorous scientific standards and a sophisticated appreciation of the academic study of religion. RBB welcomes contributions from a wide array of biological and related disciplines, ranging from cognitive science and evolutionary psychology to and religious studies. RBB publishes high quality research articles, target articles with about ten solicited commentaries and an author response, case studies, and occasional review articles. Issues are published three times during 2011, and four times annually from 2012 onwards.

All articles published in this journal have undergone a rigorous process of peer review.

Disclaimer: The Institute for the Biocultural Study of Religion (IBCSR) and Taylor & Francis make every effort to ensure the accuracy of all the information (the “Content”) contained in its publications, including through the most rigorous peer review. However, IBCSR and Taylor & Francis and its agents and licensors make no representations or warranties whatsoever as to the accuracy, completeness, or suitability for any purpose of the Content and disclaim all such representations and warranties whether express or implied to the maximum extent permitted by law. Any views expressed in this publication are the views of the authors and are not necessarily the views of the Editors, IBCSR, or Taylor & Francis.

Retired Members of the Editorial Staff

Publishers should send potential books for review to:

RBB uses Taylor & Francis’s online submission system for managing submissions, peer review, and production. Authors should submit manuscripts at online submission site. Direct any questions to This email address is being protected from spambots. You need JavaScript enabled to view it..

Public and media interest in the scientific study of religion is picking up steam. Front page stories and bestselling books on the new evolutionary and neuroscientific studies of religion are now commonplace. People intuitively grasp that we need a deep understanding of religion if we are to understand ourselves. Religious beliefs and behaviors exert a profound impact on mental and physical health, dietary habits, mating preferences, and economic behavior. They sustain many lethal conflicts and help to heal many others. For billions of people, religious beliefs influence who they marry, how they rear children, who they spend time with, and how they comport themselves in daily life. Clearly, religion is central to understanding human life.

The upsurge in public interest in religion has been paralleled by comparable developments in academia. New graduate programs in the cognitive and biological study of religion have recently emerged (e.g., at Oxford University) and existing programs, such as at Queen’s University, Belfast, and Aarhus University in Denmark, are filled with creative and productive students. Aside from the many established programs (see examples here), clusters of faculty at the University of Michigan, the University of British Columbia, Washington University in St. Louis, the University of Connecticut, Boston University, and elsewhere are continuing to train the next generation of scholars studying religion from evolutionary, cognitive, and neurological perspectives.

The number of publications examining the cognitive and neurological bases of religious thought and behavior has steadily increased over the past few years. An articles search in Ex Libris's Primo Central consolidated index on May 24, 2011 for keywords (religio* AND (neuro* OR scien* OR cogniti* OR cultur* OR evolutio* OR biolog*)) yielded the following results by year. 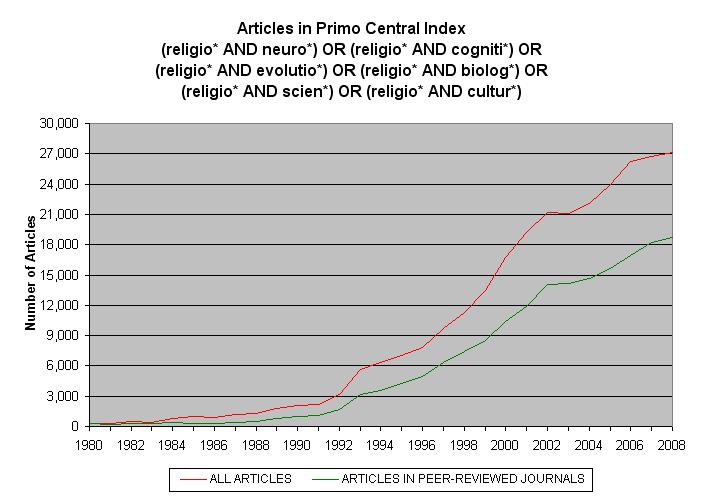 A more refined search of the same database for academic journal articles having keywords (religio* AND (neuro* OR cogniti* OR evolutio* OR biolog*)) yielded results with a similarly spectacular growth trend, as follows. 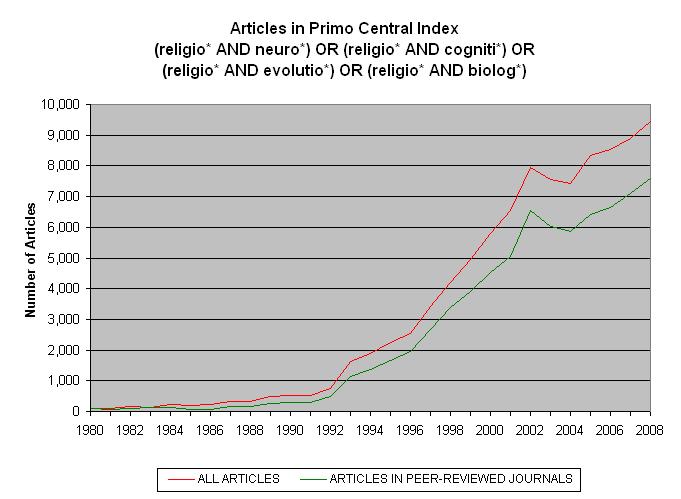 In fact, the growth rate is even higher than these results suggest, because Academic OneFile indexes only two (Zygon and Journal for the Scientific Study of Religion) of the five major journals in which relevant academic articles are most often published.

Research, then, is moving at a fast pace. This research has been complemented by numerous biological, anthropological, and psychological studies exploring the evolutionary pressures that have shaped human religious behaviors, beliefs, and experiences. While most of this new work makes extensive use of evolutionary models, these studies are rooted in traditionally distinct disciplines and sub-disciplines. For this reason, the evolutionarily guided study of religion is developing along many independent tracks, and researchers are often unaware of the advances being made by scientists with similar interests who work outside their own discipline.

Most scholars in the field recognize the problem, and there have been a few recent attempts to rectify this situation. For example, the Evolution of Religion conference held in early 2007 brought leading evolutionary scholars, neuroscientists, and cognitive scientists studying religion together for a week of lectures, debate, and discussion. Subsequent conferences, such as at the Max Planck Institute and at meetings of the International Association of the Cognitive Science of Religion (IACSR), have sustained the momentum. Websites have been developed, such as the Evolutionary Religious Studies website at Binghamton University, to continue the interdisciplinary conversation that has emerged. There are well-funded new research programs, such as the wide-reaching Evolution of Religion: The Adaptive Logic of Religious Beliefs and Behavior. And the American Academy of Religion has initiated a new consultation on the Cognitive Science of Religion.

The biological study of religion has benefited from its interdisciplinary roots, but this diversity also poses its primary challenge. Research is currently published in too many journals in diverse fields making it nearly impossible for scholars to keep up with, and more importantly, to build upon each other’s work. Despite enormous interest and growth, the field will progress slowly without a journal devoted to publishing relevant groundbreaking research. The journal Religion, Brain & Behavior (RBB) will help to centralize current research in this area and thus form a greater sense of field identity and increase the efficiency of research.