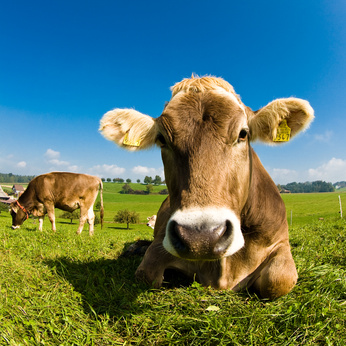 Neurological investigation into human spiritual experiences has made rapid progress in recent years. Researchers have linked profound spiritual phenomena with the deeper, more ancient areas of the brain that evolved before the cerebral cortex, which governs higher cognitive functions. In particular, the limbic system, which rests beneath the cortex and is in charge of most emotional responses, is strongly linked to religious experience, especially mystical feelings of oneness and mystery. Being the product of pre-human – and even pre-hominid – evolution, the limbic system is shared with other animals, including dogs, cats, and most other animals kept as pets or on farms.
Two prominent professors, neurologist Kevin Nelson (University of Kentucky) and ecologist Marc Bekoff (University of Colorado - Boulder), have recently caused a stir by suggesting that the presence of the limbic system in animals implies that they, too, are capable of religious experiences. They might be struck with sudden overwhelming impressions of oneness and mystical unity, for example, or with joy, wonderment, and dislocation in time. The assertions go further: since out-of-body and near-death experiences are assumed to be caused by physiological functions shared by both humans and animals, there’s no reason to think that animals don’t also see a light at the end of a tunnel when their time comes.
The annals of ethology, or the study of animal behavior, boast evidence that bolsters such claims. Jane Goodall and Bekoff have both witnessed spontaneous dancing among chimpanzees after heavy rains, and Goodall has suggested that some of those chimpanzees may even have entered trance states similar to those experienced by human religious worshipers. Meanwhile, new research in primatology strongly indicates that chimpanzees are more aware of, and deeply affected by, death than was previously thought.
The balance of evidence, then, seems to be slowly swinging towards a commonality of spiritual experience among humans and animals. If chimpanzees mourn the deaths of their family members and dogs have the ability to experience mystical oneness, perhaps the core of religious phenomena is something deeper than mere cultural contrivances.
Of course, the neurological research that backs up animal spirituality can come across as uncomfortably reductionistic. On the basis of the “tunnel” phenomenon reported by many near-death experiencers, Nelson asserts that all near-death experiences arise from reduced blood flow to the brain. This explanation seemingly does not address the many other aspects of near-death and mystical experiences, such as a profound sense of joy, life reviews, and a reduced fear of death, that are often reported to be more emotionally meaningful than the “light at the end of the tunnel.” But these elements may eventually be explained by science as well, and even the discrepancy between people’s profound experiences and their drab-seeming scientific explanations highlights something vitally important about spiritual experience: its subjectivity. Spiritual experiences are spiritual because we experience and label them as such.
Perhaps, then, the most important question raised by the research into animal spirituality becomes: when a dog has a spiritual experience, does it know it’s having a spiritual experience? While we might not ever be able to ask Spot this question directly, we can at least rest assured that the line between humans and animals is thinner than we ever supposed.