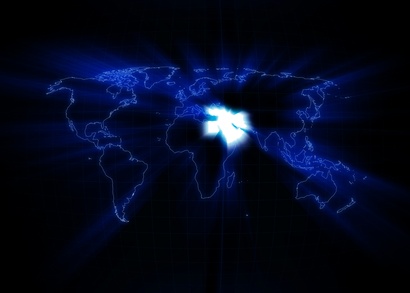 In the United States, religion is usually said to be a personal affair – one’s own private decision about how and what to believe. But this remarkably private and individualistic approach is somewhat odd when compared with the vast majority of cultures and religions throughout history. Far more often, religion has been a public affiliation, determining cultural identities, affecting marriage and family choices, and defining groups in relation to each other. A fascinating recent study published in PLOS Genetics shows just how inextricable religion often is from culture, finding that religious identity has decisively shaped the genetic landscape of the Levant - so decisively, in fact, that Lebanese Muslims are more closely related to fellow Muslims from Morocco or Yemen than they are to their Christian or Jewish compatriots.

The Levant is an area of land that roughly corresponds to modern-day Israel, Jordan, Palestine, Lebanon, and Syria. One of the most religiously diverse regions in the world, the Levant is a crossroads for all three of the major monotheistic religions – Christianity, Islam, and Judaism – and has played a central role in the development of human agriculture and urban culture. Each of the three monotheisms is either historically rooted in the Levant, as in the cases of Christianity and Judaism, or claims areas of the Levant as historically sacred (the Temple Mount in Jerusalem is one of the three most sacred sites in Islam). What’s more, several smaller religions find their origins in the region, including the Druze, an offshoot from Islam that emphasizes the inexpressibility of God’s nature and allows no conversion from other religions.

Against this fantastically diverse religious backdrop, a multinational team of researchers led by Marc Haber of Pompeu Fabra University set out to discover whether the religious distinctions between groups in the Levant might be reflected in the DNA of the people who lived there. Using a collection of genetic samples from more than 1,300 Lebanese residents, the researchers found that single-nucleotide polymorphisms – the most basic measure of differences between DNA in individuals – clustered in the Lebanese population according to religious identification, such that Lebanese Christians formed a single genetic cluster, Muslims their separate cluster, and Druze yet another cluster. This finding implied pretty strongly that marriage traditions in Lebanon mostly broke down along religious lines, with Christians primarily marrying only other Christians, Muslims marrying Muslims, and so forth.

The researchers next took their investigations a step further, including genetic data from all around the Levant and the non-American world in their second round. The endogamous (non-intermarrying) character of Lebanese Christians, Druze, and Muslims persisted in this analysis, but something new showed up as well: Lebanese Muslims, in addition to being relatively genetically isolated from their Christian, Druze, and Jewish countrymen, actually showed significantly genetic similarities with fellow Muslims from far-flung groups like Saudis and Bedouins. Meanwhile, Ashkenazi Jews showed significant genetic relatedness with people from Eastern Europe and the Causasus – an unsurprising finding that reflects the historical interlinkage between Ashkenazi Jews and European culture.

Finally, Haber and his colleagues used a different measure of genetic diversity, haplotype reconstruction, to determine approximately when the various populations in the Levant parted ways from each other genetically. Haplotypes are composed of many nucleotide sequences and are passed down intact as units from parents to children, thus forming one of the basic loci at which genetic mutation and selection does its work. Because there is significant diversity in haplotypes across populations, Haber and his fellow researchers were able to generate a “family tree” that clustered groups of people according to how similar or dissimilar their genomes were at a particular haplotype. More specifically, the researchers used a simulation to break down the haplotype of each individual into “chunks,” and then tested the simulation to see how many “chunks” of haplotypes from different ethnic or geographic groups it would take to reassemble the original. The more chunks it took, the less related the individuals in question were.

The team used the results of the simulation to produce a genetic family tree. Unsurprisingly, religious groups tended to cluster together: both Ashkenazi and Sephardic Jews grouped together on a single branch of the tree, while Druze from different countries all similarly clustered on their own branch. Fascinatingly, the Muslim populations from around the Levant were more genetically similar to Muslim groups from distant countries than they were to their Christian or Druze neighbors. As the authors put it,

Using a statistical method designed to estimate the amount of time lapsed since populations diverged genetically, Haber and his colleagues then calculated how long it had been since each Levantine group had last intermixed with sub-Saharan African populations. The results showed that Christians had ceased intermixing with African populations approximately 2,300 to 2,000 years ago – times marked by the rise of Hellenic rulership in the Mediterranean and the advent of Christianity, respectively. Druze populations had last intermixed with sub-Saharan African genes around 1,200 to 1,000 years ago, precisely when the Druze offshoot faith arose. And Muslims ceased intermingling with African populations around 600 years ago, which corresponds roughly to the rise of the Muslim Ottoman Empire and the fall of Constantinople.

Particularly with the Levantine Druze, these results show that religious identification can have concrete – and immediate – effects on everything from geographic mobility to intermarriage. What’s most interesting about this research, though, isn’t necessarily the findings themselves; in fact, it’s not particularly surprising to learn that religious groups are genetically isolated from one another, since anyone can see that religious believers generally marry other believers of the same stripe. The takeaway point, instead, is that religion is not only an abstract thing, a set of beliefs or propositions. By looking at the actual chromosomes of real people – their basic, biological essences – the researchers found that religious identity was literally a shaper of who we are. These data tell a more compelling story about religious identity, a story with roots in people’s physical beings. And that story is hard to ignore.